About 35-40% of people have never heard of sepsis and have very little idea of what it is. In an attempt to raise awareness of this serious medical condition, September has been designated as Sepsis Awareness Month. A deadly health issue, sepsis infects more than 1.7 million people in the United States every year and is one of the top 10 causes of disease-related deaths in the country. (Cooperman, 2017) By understanding the severity and time-sensitive nature of sepsis, the signs and symptoms, and action steps, you can potentially save lives.

Once thought of as “blood poisoning,” sepsis is actually both more complex and simple. Sepsis is defined as “the body’s extreme response to an infection. It is a life-threatening medical emergency.  Sepsis happens when an infection you already have triggers a chain reaction throughout your body.  Infections that lead to sepsis most often start in the lung, urinary tract, skin, or gastrointestinal tract. Without timely treatment, sepsis can rapidly lead to tissue damage, organ failure, and death.” (Centers for Disease Control, 2022)

Anyone can develop sepsis because anyone can get an infection. Infections can be bacterial, viral or fungal and can enter the body at an injection site, burn, wound, lungs – just about anywhere. Infections can include a urinary tract infection, pneumonia, or staph. In addition, certain people are at higher risk for developing this life-threatening condition. Those with elevated risk levels include:

Children under 12 months of age

Someone who has already had sepsis at least once

Individuals with chronic medical conditions including diabetes, cancers, and lung or kidney disease

People who have recently been hospitalized

What Makes Sepsis so Serious?

Sepsis is a potentially deadly condition because it can create a series of escalating reactions within the body leading to possible organ failure. As the body’s immune system attempts to fight infection, it can go into overdrive and effect vital organs like the liver and kidneys. Sepsis may also cause blood pressure to drop so low that it triggers a condition called “septic shock.” Septic shock can starve the organs and tissues of oxygen-rich blood. (National Institutes of Health, 2014)

Because sepsis is a medical emergency, understanding the symptoms and acting fast are vital to prevent serious harm. The Sepsis Alliance developed the catchphrase, “It’s About Time™” to help people understand what to look for and when to take action. A person with sepsis could have one, several or all of the symptoms described.

I – Infection - signs or symptoms of an infection

Other symptoms may include clammy or sweaty skin and a high heart rate or weakened pulse. (Sepsis Alliance, 2020)

If you or someone you know experiences all or some of these symptoms, seek medical care immediately, call 911, or go to the emergency room. Time is of the essence when fighting sepsis. The Sepsis Alliance estimates that as many as 80% of sepsis-related deaths could have been prevented with faster diagnosis and treatment.

The good news is that most people with sepsis do survive. Treatment may include a hospital stay, careful monitoring of vital signs, and antibiotics.

Although sepsis is not 100% preventable, there are steps everyone can take to help reduce the chance of developing sepsis.

Preventing Infection – If you have a chronic health condition, stay on top of your care. Keeping current on vaccinations can help prevent health conditions that could lead to sepsis.

Practicing Good Hygiene – In today’s world, a great deal of emphasis has been placed on proper handwashing techniques and with good reason. Washing hands with soap and water can go a long way toward removing harmful germs that could cause serious illness if they enter the body.

Knowing the Signs and Symptoms – As previously mentioned, recognizing the signs and symptoms of a sepsis is critical to ensure that the person gets help as quickly as possible

Act Fast – As the CDC states: “Sepsis is a medical emergency. If you or your loved one has an infection that is not getting better or is getting worse, ACT FAST. Get medical care IMMEDIATELY. Ask your healthcare professional, ‘Could this infection be leading to sepsis?’ and if you should go to the emergency room.” (Centers for Disease Control, 2022)

Centers for Disease Control. (2022, August 9). What is Sepsis? Retrieved from CDC.gov: https://www.cdc.gov/sepsis/what-is-sepsis.html

Cooperman, J. (2017, July 20). Sepsis is the 10th leading cause of death in the U.S. Retrieved from St. Louis Magazine: https://www.stlmag.com/health/the-shock-of-sepsis/ 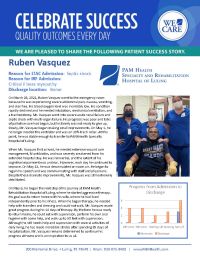